How Networking Changes When You Become a Lawyer Mom 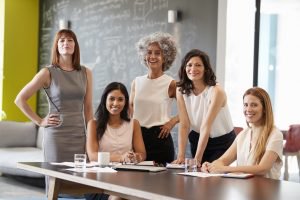 Being a lawyer and a mom is tough, but being part of the lawyer mom network could be the best thing to ever happen to your career.

One of the most vivid memories from my childhood (for some odd reason) is the first time I heard the term “networking,” as we think of it. My high school algebra teacher made an offhand comment about words changing in meaning over time (I wish I could recall why this was part of an algebra class), and specifically referenced “networking.” She must have assumed we all knew what this was (we didn’t — my mind went to computer networking), since she didn’t elaborate. Or maybe she didn’t elaborate because she, like so many of us still, had not quite figured out what networking truly is, or how to succeed at it. This theme of assuming people know all about networking — what it is, how to do it, etc. — has been pervasive throughout my life.

I spent the majority of my career in Biglaw, where we were giving an annual “networking” budget. In short, this meant we got to go out to a few nice lunches and dinners with our non-lawyer friends, and on the firm’s dime (always with a light-hearted chorus of “Thank you, Uncle [Firm Name Here]!” at the end of the meal). Most of us — myself included — never truly understood or cared about networking, since we knew clients only put up with our insane billing rates to have our firm on the case, not us as individual “baby” lawyers.

Five years ago, I moved to a boutique firm (common in my field of patent litigation), and suddenly, networking actually mattered. I had more reasonable billing rates and could offer all sorts of alternative fee arrangements that made me attractive to clients, even at my level of seniority. I immediately started trying to network, and had some limited success. But a year later, I was pregnant, and then suddenly a new mom to a gorgeous baby girl. Everything in my world changed, including my newly established networking routines. The happy hours, book clubs, dinners, and conferences that used to be so fun (and valuable) for me now suddenly meant missing the single hour or so in the evening that I got to spend with my daughter. I quickly realized that this wasn’t a sacrifice I was willing to make anymore, even for my career that I had worked so hard to build.

But if you’re a junior partner (like I am now), the primary way to build your practice is to get out there and make a name for yourself in your community and your practice area — in short, network. But as a new mom, I realized that if I was going to be able to continue networking, the meaning of this word was going to have to change again, just as it had for me in high school. My old way of doing things wasn’t cutting it, so I had to find new ways.

Once I began looking, I found that there is enormous strength in being part of the lawyer mom network. There are so many groups out there, both locally and globally, focused on lawyer moms. These groups get it (and by “it,” I mean just about everything), and so they trade the happy hours and dinners for online discussions and events after bedtime or during lunch — i.e., times I am already away from my daughter.

What’s more, the connection I have with other lawyer moms is organic — the word people have always used to describe successful networking to me, but without ever explaining how to accomplish this. In other words, I have found that I often have an instant bond with the lawyer moms I meet — both virtually and in real life. Our lives (and practices) are obviously different, but so many of our experiences (and struggles) are shared. And because these women realize that it does truly take a village to do what we are doing, they put so much effort into lifting each other up. Whether it is answering daily parenting questions, tackling truly difficult life circumstances, or yes, even providing referrals, these women have become the types of connections that produce truly valuable networking — and true friendships (I am starting to see that often, there is not really a difference). These women in my new mom networks know (and have taught me) that networking is much more than about what others can do to help us — it is about knowing that lawyer moms are truly a “herd” — and that by lifting each other up, we make the road a little bit smoother for everyone.